The 2018 film year has given us great features across all categories ranging from horror and drama to comedy. In what feels like a record-breaking year of achievement, storytelling and representation, many of these films have captured our hearts in theaters and at home. Our team at PCR put together the best features of the year. This involved coming up with individual top 25 lists, which added to a total of 51 different films. The films were ranked then amalgamated on a point system (#1 = 25 points, #25 = 1 point) to create our final top 25.

Interestingly, only 7 films appeared on all of our lists; but that just speaks to the team’s eclectic taste and love for different types of filmmaking. Throughout these past 12 months of watching movies and creating our list, we’ve come to understand and appreciate the respective opinions of every team member, which allows us to celebrate the various experiences of watching these films. So without further ado, here are PCR’s favorite 25 films of 2018:

There’s nothing more powerful than a mother’s love; and in Jason Reitman‘s Tully, this is depicted with such unrestricted beauty and honesty. Charlize Theron delivers an incredible performance, showcasing the difficulty associated with motherhood. And the film is both compelling and creative while telling a familiar story, which is exactly why it makes our list.

Greg Berlanti’s film about growing up and coming out is as equally emotional as it is entertaining. Love, Simon is genuine and executed in a way that makes so many people around the world understand and relate to the storyline, which immediately made the film one of PCR’s favorites… “Everyone deserves a great love story.” Why not start by falling in love with Love, Simon?

Paul Dano’s directorial debut is one for the ages. Wildlife is simplistic and raw detailing a young boy’s perspective as his family falls apart before his eyes. The film includes an incredible ensemble led by Carey Mulligan, who gives the performance of her career. With the film’s messages and Dano’s incredible style, PCR highly recommends this beautiful story detailing a family in crisis.

22. Spider-Man: Into the Spider Verse

Spider-Man: Into the Spider-Verse is a refreshing take that respects and updates the expansive Spider-Man mythos. Arguably the best comic book film of the year, it changes the game for both superhero spectacles and animation features, which is exactly why it is one of the best films of 2018 according to the PCR team.

James Wan’s deep-sea adventure film, Aquaman, swam onto the big screens mid-December 2018. But because of the incredible visuals, designs, cast chemistry, and story, this larger-than-life comic book movie captured our hearts immediately, which is why it’s one of our favorite films of 2018!

At #20 is Albert Hughes’ heartwarming story about the developing relationship between a wolf and a young man who was separated from his tribe. Alpha is a well-acted and remarkably filmed story that is capable of capturing audiences’ hearts. These factors, among the film’s strikingly gorgeous cinematography, are aspects that make it one of 2018’s most underrated films and one our favorites that we recommend. 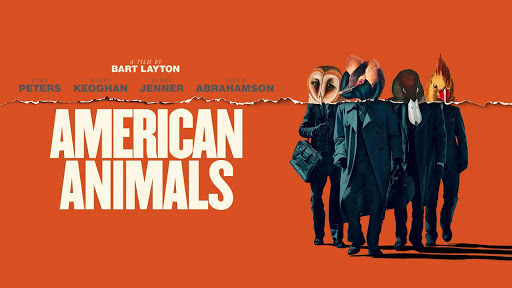 One of the most unique films to come out in 2018 is American Animals. Bart Layton’s docu-fiction heist film is a creatively-edited and wonderfully acted retelling of a story about kids who got in over their heads. The great cinematography paired with the likable characters make this one of our favorite watches in theaters this year.

Coming in at #18 is Debra Granik’s feature Leave No Trace. (Read our Full Review Here). Her ability to craft a film yielding atmospheric brilliance and a riveting performance from Ben Foster is unlike any on our list. It’s the kind of film that demands the audience’s empathy and recognition of nature’s greatest allures, which is precisely why it’s one of our most recommended films to watch of the year.

From Ryan Gosling’s masterful and signature quiet demeanor, to the picturesque launch sequences, First Man proves that Damien Chazelle is a director with a clear vision for his films. His understanding of what makes great cinema is exactly the kind of filmmaking we love at PCR, and it’s especially why his technically superior film makes our list!

Mission: Impossible – Fallout was one of the most thrilling movies of 2018. (Read PCR’s Review Here). Christopher McQuarrie and Tom Cruise pull out all the stops with the stunts and non-stop action sequences that have become some of our team’s favorite nail-biting moments in cinema of 2018! Here’s your mission: Go See Mission: Impossible – Fallout if you haven’t done so. And should you choose to accept, you won’t regret it!

Sandi Tan’s Shirkers is, without a doubt, one of the most beautiful, haunting and moving stories of 2018. This is a documentary that any film lover would enjoy as it caters to raw human emotions like accepting the lemons life may give you, but doing everything in your power to create lemonade – all while learning a few things along the way. Do yourself a favor and watch it – available on Netflix.

Not only is Blindspotting one of the must powerful and enriching watches from 2018, but it has one of the best endings in film from the entire year. Carlos López Estrada’s directorial debut should be watched by all. It contains an incredible soundtrack and visuals that will sink into your mind long after the film is over.

Coming in at #13 is a refreshing tale of family love and triumph. Shoplifters is a must see. Hirokazu Kore-eda’s decision making in this film are beyond extraordinary, and his attention to the characters is an aspect of filmmaking that is so underappreciated. For these reasons, we highly recommend this film.

12. The House That Jack Built

In mid December 2018, the shockingly grotesque yet beautiful psychological horror The House That Jack Built premiered. No stranger to pushing boundaries, Lars von Trier’s study of a serial killer is rich with self awareness and completely dismissive of subtlety. But this bold storytelling is something that we at PCR appreciate and love, which is exactly why it comes in at #12.

11. If Beale Street Could Talk

At #11 is Barry Jenkins incredible film, If Beale Street Could Talk. (Read our Full Review Here). The film is poetry in motion with a score that matches the emotion so elegantly conveyed on screen. Together with James Laxton’s cinematography, Beale Street exudes passion and precision when it comes to defining and portraying the beauty of Black Love and the pain of being Black in love in 1970s Harlem. “Trust love all the way,” and see this film as soon as possible!

Boots Riley’s film, Sorry To Bother You, is one of the funniest and most creative films of the year. The brilliant storytelling of the script offers interesting social commentary that showcases a far-fetched and extreme depiction of its ideas, but it is done in a way that will draw audiences of all types into its world. For these reasons, it has made our top 10.

One of the biggest, pleasant surprises from 2018 is John Krasinski’s A Quiet Place. The film is filled with strong performances from all cast members, tense and spine-chilling sequences, and heartwarming themes of family and survival, which is exactly why we at PCR love and recommend the film.

Steve McQueen’s Widows comes in as the 8th best movie of 2018. (Read the Full Review Here). The film features a diverse cast of four women who show that multifaceted women can helm a story centered around violence, power and control, and do it with elegance and undeniable tenacity. Widows contains a 3rd act that is chaotic yet so exhilarating that fans all over the world can appreciate and realize that these ladies certainly “had the balls to pull this off.”

One of the best cinema experiences of 2018, Roma is spectacular filmmaking at its finest. The amount of detail that went into crafting this incredible feature should be a film itself. And Alfonso Cuarón’s eye for creating memorable visuals is a treasure. So, it’s no wonder that this beautiful and emotional film captured the hearts of all of our team members.

Coming in at #6 on our list is “not man, not machine…more.” Leigh Whannell is no stranger to the horror genre, and it shows with this underrated achievement. Upgrade is blended with humor, emotion, incredible action-sequences, and flawless camerawork. But if that isn’t enough to convince you of its epic content, that ending will surely send you into a frenzy.

5. You Were Never Really Here

You Were Never Really Here is a bold and stunning achievement from director Lynne Ramsay. The film packs several punches with its unabashed violence and the performance of a lifetime from Joaquin Phoenix. So, it’s no wonder it made all of our lists, and appears in PCR’s top 5 films of 2018.

2018 has been a great year for mystery and suspense, and it continued when Aneesh Chagantry’s Searching debuted in theaters (Full Review Here). Between the unexpected plot twists and the incredible acting led by John Cho, this technology-driven film is one of PCR’s “must-sees” of 2018.

At #3 is Alex Garland’s mesmerizing and equally intoxicating film, Annihilation. Between the incredible visuals and a 3rd act that is both terrifying and exciting, the film has certainly left a lasting impression among a variety of audiences. These aspects, along with the film’s creative and thought-provoking script, are worthy of recognition and praise, which is exactly why it landed on all of PCR’s team members’ lists.

Spike Lee’s BlackKklansman makes an appearance at #2 on our list. (Read our Full Review). The comedy-crime film is a work of art that is poignant, intelligent and stylish. Between the impactful usage of stunning imagery and a score that immerses itself in the gravity and soul of the script, this film doesn’t shy away from showcasing an uplifting yet disturbing depiction of 1970s America. But its ultimate message, which reveals how hatred in America will never die unless we, the people, give say, influence and representation to all Americans, is exactly why it’s one of 2018’s best.

At the top of our list is none other than Ari Aster’s directorial debut, Hereditary. (See PCR’s Full Review). The heavy-hitting sequences paired with Toni Collette’s jaw-dropping performance made Hereditary our favorite theater experience and film of 2018. The technical achievement and incredible sound mixing offered moments of chaos and sheer panic leading to unnerving transitions. And ultimately, the film has set a new standard for the horror genre.

This site uses Akismet to reduce spam. Learn how your comment data is processed.